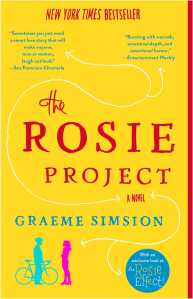 The rom-com:  The Rosie Project by Graeme Simsion.

Genetics professor Don Tillman has looks, brains, a successful career, and no social skills.  When Don decides he is ready to get married, in spite of a history of first dates and no second dates, he decides to approach the matter scientifically with a sixteen-page survey to weed out all undesirable women.  As he embarks upon the Wife Project, a meddling colleague and friend asks him to help Rosie, a bartending grad student, find her biological father.  Naturally, the Wife Project and the Father Project are meant to collide.  The Rosie Project is charming and fun and just different enough from your standard romantic comedy. 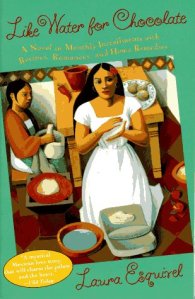 The culinary love story:  Like Water for Chocolate by Laura Esquivel.

This novel tells the story of the de la Garza family, where the youngest daughter is expected to remain unmarried and care for the mother until her last days.  Tita, as the youngest daughter, is forbidden to marry her love, Pedro.  Instead her mother marries off Tita’s older sister to Pedro.  Tita is outwardly obedient to her mother, but her emotions come out through her cooking, resulting in poisoned wedding cakes and aphrodisiac quail recipes. Tita’s recipes provide structure for the novel, with each chapter beginning with a recipe that will be central to the story.

Fifty-nine-year-old Ove is the curmudgeon next door.  He is the neighbor who will tell you when you haven’t disposed of your trash properly or if he doesn’t care for your car.  But Ove was once a young man who took the train two hours in the wrong direction every day just to spend time with the woman who would become his wife.  And while Sonja was alive, she was all the color he needed.  With Sonja gone and retirement forced upon him, Ove’s life has lost both its joy and its purpose, and he wakes each day resolved to kill himself at last.  Life has other ideas for him in the form of unwanted new neighbors and an unwanted cat.  Soon Ove must once again become the man Sonja always knew him to be: “the strangest superhero.”

(The story of a widower is admittedly a strange choice for a Valentine’s Day reading list, but I found the love story of Ove and Sonja, told in chapters that alternate with the main storyline, to be extraordinary.)

The darker Valentine:  Fates and Furies by Lauren Groff.

Because sometimes one is not in the mood for a fluffy Valentine’s Day read.  This novel covers 20 years of marriage between Lotto and Mathilde.  In college, Lotto is a womanizer, and Mathilde is studious and keeps to herself, spending her weekends modeling.  Lotto and Mathilde begin dating just before graduation and impulsively get married.  Told from Lotto’s point of view for the first half and Mathilde’s for the second, Fates and Furies is not an optimistic or idealized view of marriage, but more of a look at loyalty and betrayal in the murkier areas of life.  It’s love story with complications.  And secrets upon secrets. 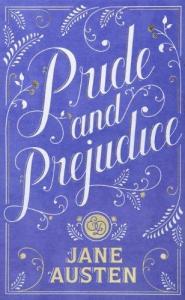 The classic: Pride and Prejudice by Jane Austen.

Mistaken first impressions are a common starting point for light-hearted romances, but I doubt it has ever been done quite as well as in Pride and Prejudice.  Miss Elizabeth Bennet initially loathes Mr. Darcy.  He snubs her at a dance and discourages his close friend from proposing to Elizabeth’s shy sister, Jane.  Mr. Wickham, a soldier, confirms Elizabeth’s suspicions with stories of lifelong wrongs from Mr. Darcy.  In time, Elizabeth learns she’s trusted the wrong man and her own incorrect impressions. Like all of Austen’s novels, Pride and Prejudice has perfectly developed characters and understated wit.  However, it has something that the other novels lack.  That “something” is, of course, Mr. Darcy.

In summer and early fall, I thought my stepdaughters, soon to turn 13 and 15,  would spend the bulk of their teen years with the first female U.S. president in office.  Like many, I did not think the most qualified candidate would lose to the least qualified.

I am grateful both of my girls are free thinkers with no shortage of strong opinions and both have a diverse group of friends, even growing up in suburbia.  Both of them have been eager to volunteer and to give to the less fortunate.  They are both smart and ambitious and interested in the world around them.  I do not doubt they will become powerful women.  And my powerful girls need books that open up the world for them, make them think, and cultivate empathy. 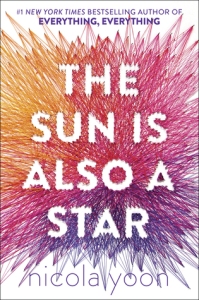 The Sun is Also a Star by Nicola Yoon.  Given current events, this book about immigration and deportation is one of the timeliest things you could give a teen reader.  Natasha’s family is family is twelve hours away from being deported to Jamaica when she meets Daniel.  The two teens have little in common –Natasha is practical and scientific and Daniel is a poet under pressure to become a doctor– but they fall in love. The Sun is Also a Star has done well with critics, earning a 2017 Printz Honor and several other awards, and teens will love it as much as the critics

The Absolutely True Diary of a Part-Time Indian by Sherman Alexie.  Junior has grown up on the Spokane Indian Reservation. He is a gifted student and a good basketball player, but he is not tough in the way that is prized on the reservation.  When a teacher encourages him to go to the all-white school outside the reservation, Junior agrees with his parents’ support, but his decision is viewed as a betrayal on the reservation, even by his best friend.  At his new school, Junior is surprised when he makes friends, but he does so while living a double life, one where he disguises his poverty and his difficulty in getting to and from school each day.  Throughout one school year, Junior experiences losses, several surprise triumphs, and makes peace with his identity.

All American Boys by Jason Reynolds and Brendan Kiely.  In a routine trip to the store for chips, sixteen-year-old Rashad, a black high school student,  is mistaken for a shoplifter and becomes the victim of police brutality.  The incident is witnessed by Rashad’s white classmate, Quinn, but the cop who beat Rashad had helped to raise Quinn.  The story is told in alternating perspectives of Rashad and Quinn by two different authors.

The historical novels of Cat Winters:

The Cure for Dreaming is the story of would-be suffragist, Olivia Meade, who wants to go to college, ride a bicycle, and vote.  Olivia’s father wants her to marry immediately after graduating high school and alarmed by his daughter’s independence. Mr. Mead hires a traveling mesmerist to hypnotize his 17-year-old daughter so she will accept the world as it is and be unable to argue, and all that Olivia will be able to say when she is angry is, “All is well.”  It works, but the mesmerist also gives Olivia the ability to see people as they truly are as a protection in her newly fragile state. 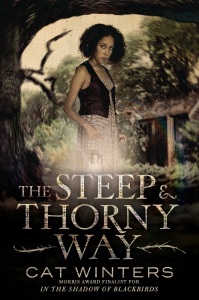 The Steep and Thorny Way is a loose retelling of Hamlet, set in 1920’s Oregon.  Sixteen-year-old, Hanalee Denney learns that Joe, who was convicted of killing Hanalee’s father in a drunk driving accident,  is out of prison and back in her hometown of Elston, Oregon.  When she consents to meet with Joe, he tells her that her father’s only injury from the accident had been a broken leg, and he had not been in any danger until he was under the care of the town doctor, who is also Hanalee’s new stepfather.  Hanalee, who is the daughter of a white mother and black father, begins investigating the local rumor that her father is a ghost wandering the country road and she also begins to investigate her new stepfather to see if he might be a murderer and a member of the local Klan. 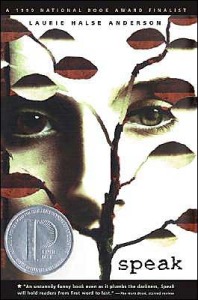 Speak by Laurie Halse Anderson.  Speak is, to the best of my knowledge, the first YA novel to deal with the issue of rape in depth.  Now many YA novels focus on rape and consent including Maria Padian’s Wrecked and Louise O’Neill’s Asking for It, but Speak broke the ground for the others.  Ninth grader, Melinda Sordino, begins high school as the most unpopular girl in the school.  She called the cops at a party over the summer and even her closest friends have abandoned her as a result.  She is unable to speak about what happened to her at the party, or even think about it, and over time she finds herself unable to speak at all.  It is not under Melinda realizes that she is not alone in her experience that she is able to speak up for herself. 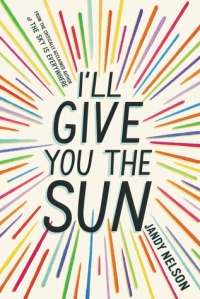 I’ll Give You the Sun by Jandy Nelson.  Noah and Jude are twins with extremely different personalities. At thirteen, introverted Noah looks to his art to save him and develops a crush on a neighbor boy, while Jude’s priority is on her social life and adventurous hobbies such as cliff-diving. At sixteen, the relationship between the twins has been destroyed, and Jude is now the anti-social twin. Noah is outwardly the more successful twin, but beyond the surface, he isn’t doing any better than Jude and is more firmly wedged in his closet than he was at thirteen. The novel alternates chapters narrated by Noah at thirteen with chapters narrated by Jude at sixteen. 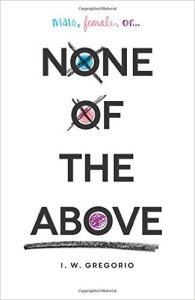 None of the Above by I.W. Gregorio.  Kristin Lattimer is eighteen when she learns that she is intersex.  Kristin never got her first period in spite of being in her late teens, but it never occurred to her that this might be unusual since she assumed her athleticism delayed it.  When she loses her virginity, it is unusually painful, and she goes to the doctor and finds her reproductive system is not entirely female.  As Kristin struggles with her gender identity, news of her diagnosis spreads through her school and Kristin, who was the homecoming queen, becomes the most bullied student. 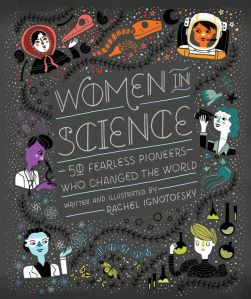 Women in Science by Rachel Ignotofsky.  This nonfiction option is not written specifically with teens in mind, being more of an all-ages coffee table book, but it is ideal for girls aged 12-17 who are thinking about college and future careers.  This book provides short bios and illustrations for fifty women, both famous and lesser known, in the fields of science, technology, engineering, and mathematics (STEM).

Here We Are: Feminism for the Real World edited by Kelly Jensen.  This one just came out, so I have not yet read it, but it certainly seems timely.  Here is the description from Amazon:

“Forty-four writers, dancers, actors, and artists contribute essays, lists, poems, comics, and illustrations about everything from body positivity to romance to gender identity to intersectionality to the greatest girl friendships in fiction. Together, they share diverse perspectives on and insights into what feminism means and what it looks like. Come on in, turn the pages, and be inspired to find your own path to feminism by the awesome individuals in Here We Are.”

FCC notice:  I have not received any free copies of any of the books listed.  I have either purchased my own copy or read library copies.