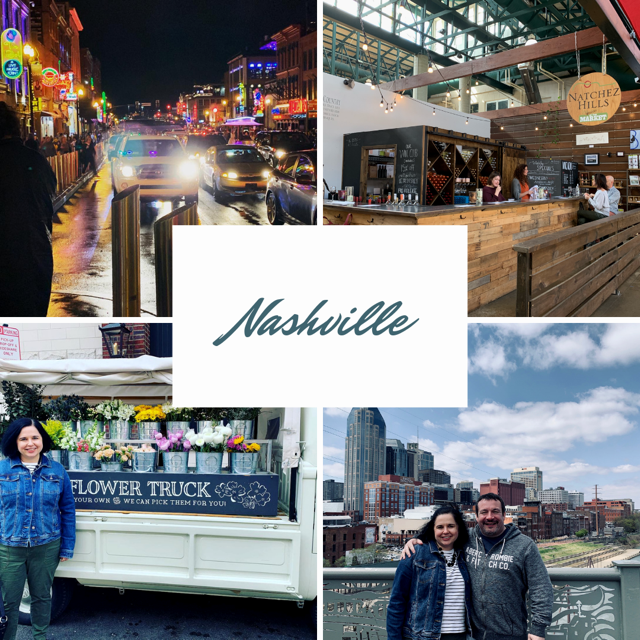 There was not enough Nashville.

Correction: Nashville was perfectly lovely, thank you very much, but my time there was not sufficient. I would like to turn around and go back and see all the things. And drink all the whiskey, if we are being honest. I would get to know the city in my favorite ways: through my feet by walking everywhere and through trying all the local foods.

I was only there 24 hours. For spring break this year, we opted to go to visit Jon’s family in Tennessee. At the last minute, we decided to leave a day early and spend a day in Nashville. There was little planning or preparation, and my husband is never allowed to pick the lodgings ever again, but I am so glad we made the trip to Nashville.

Broadway. This is where all the honky tonks are located. Traveling with teens, we only went to places where they were permitted. Several of the honky tonks (if my Google search in the car can be trusted) do allow kids before 6:00 or 8:00, but we were getting into town in the evening and we wanted both dinner and music, and it was not the easiest to find a location that would give us both and let us bring the girls with us.

That first night, we had dinner at Rippy’s on Broadway, which allows kids before 10:00. It was family friendly and the food was decent, but not memorable. While the menu could have been improved upon, the music made up for it. Rippy’s is a large place, and they have different bands playing in different areas, which works better than it sounds like it would.

Pedestrian Bridge: Basically, this is must do because it allows you to take pictures with the Nashville skyline behind you. It was pretty chilly while we were there, so we didn’t linger and just snapped a few photos, but it would be a pretty place to spend time on warmer days.

Biscuit Love. In my Google searches in the car, one name kept coming up in blogs and Best of Nashville lists and that was Biscuit Love.

I have to teach you a term that sounds dirty but isn’t: Bonut. Questionable word aside, you need this in your life because it is a biscuit deep fried like a donut. The traditional bonut is topped with lemon mascarpone and served with blueberry compote. There are also bonut-style churros, which is what we shared. These are deep fruit biscuits, coated in cinnamon sugar and served with a chocolate sauce. I regret not taking a picture before we dove into the churros, but our family is not known for our restraint with sweets. You can see a lone churro in the background of this photo, though.

I tried to go a bit lighter in my main meal after my churro, so I ordered the Lindstrom, which is shaved brussel sprouts with hazelnuts and poached eggs. I did eat some of the 15-year-old’s grits because I wanted to give grits another try (and I liked them this time!).

Hot Chicken. This is the signature food of Nashville. As you might have guessed, the “hot” refers to the spice level rather than the temperature of this fried chicken dish. You get to decide the spice level of your chicken, so your chicken is only as hot as you can handle. Unless you are me and behave like a 13-year-old boy once your ability to handle spice is questioned. My belly felt unusually warm for a solid 24 hours after this meal.

I should add the disclaimer that I did not try my hot chicken in Nashville as we ran out of time, but in Murfreesboro, where we visited family, but Party Fowl does have a Nashville location, and according to Thrillist, it’s roughly in the middle of the list of the best hot chicken restaurant ranking. The heat levels range from Mild to Poultrygeist.

I ordered the Poultrygeist.

I should have been worried when the server put not one but two glasses of water in front of me along with my chicken. The 17-year-old, who finds great enjoyment in other people’s self-inflicted pain, watched me with great interest as I ate most of my chicken, with tears streaming down my face the entire time. While I have no regrets, I am never doing that again.

Goo Goo. This a candy shop local to Nashville. The traditional Goo Goo Cluster contains peanuts, caramel, marshmallow nougat, and milk chocolate. It’s good, but I recommend the specialty Goo Goos. There is a peanut butter and pretzel Goo Goo, which is insanely delicious. You can also create your custom Goo Goo if you have a half hour or so to spare.

What I Would Do Next Time:

If I were to go with just Jon and not the entire family, I would spend more time in the honky tonks and visit some of the music-themed museums (the kids were definitely NOT interested!). Neither Jon and I are country music fans, but we could enjoy it in the proper atmosphere. 🙂

I’m also bummed that we never made it to Draper James, which is Reese Witherspoon’s boutique. It was just too far from where we spent most of our time.

Pinewood Social looks adorable, and I’d love to spend an afternoon there.

I’d give hot chicken another try (at a more reasonable spice level) and go to one of the more famous places such as Prince’s or Hattie B’s.

Distelleries would definitely a mandatory destination next time. Probably not the best place to go with teenagers, though . . .

Also, next time, we’re getting an AirBnB. Have I mentioned our motel was terrifying?