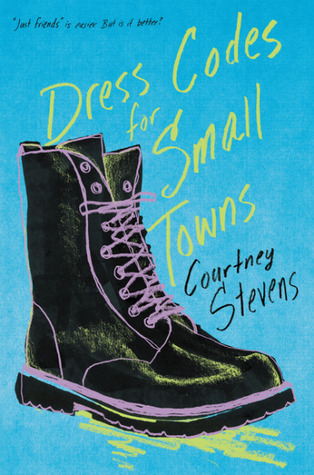 No one in Otters Holt, Kentucky will forget the youth group lock-in at Community Church because that was the night Billie McCaffrey and her friends experimented with microwaving random items, and unfortunate combination of her friend’s smelly sock and her dad’s World’s Best Minister mug resulted in a fire that severely damaged the youth room. Even before she became the girl who nearly burned down the church, Billie has frequently gotten her youth minister father in trouble with the deacons. She has the reputation of being a troublemaker and she’s a tomboy in a town where traditional femininity is prized.

Otters Holt is the home of Molly the Corn Dolly, which is a forty-foot-tall statue that all tourists take pictures with.  Also, a corn dolly is awarded every year to an outstanding woman in the community. To win a corn dolly is the highest honor in town. Corn Dolly winners are pie bakers, gardeners, caregivers, and pillars of the community. As a tomboy and suspected lesbian, Billie is outside the Otters Holt ideal. A couple years earlier, a group of women and their families even left Community Church because of Billie. Her crime? Wearing athletic clothes and tossing a football around the sanctuary during non-church hours. “Those women threw stones over a football and a girl who girled differently from them,” Billie explains.

Billie’s friends are also misfits in Otters Holt. Of her group, which they call “the Hexagon,” Billie says, “The year I was seventeen, I had five best friends–a pixie, a president, a pretender, a puker, and douchebag–and I was in love with all of them for different reasons.” While one might expect Billie and her friends to dismiss Otters Holt traditions like the Harvest Festival and the corn dolly, they actually love this about the town. On the night they nearly burn down the church, Tyson Vilmer (primary patron of the Harvest Festival and grandfather to Hexagon members, Davey and Mash) passes away, putting the tradition in jeopardy. Throughout the novel, the Hexagon develops a fundraising scheme to save the Harvest Festival.

What I liked best about this book was Billie herself. She’s a fresh and innocent character who sees the best in everyone. She’s Anne Shirley in combat boots. She’s smart and thoughtful about her world, but she’s not cynical. Throughout the book, Billie is seeking to understand gender and sexuality. While she is comfortable as a boyish girl, she is upset when her friends jokingly list her as a boy in a Sadie Hawkins chart they create on a whiteboard. She might hang out with mostly boys, but she doesn’t consider herself to be one of the boys. Her sexuality is more of a gray area for her, and she is curious about both her male and female friends. She resents that the church community demands that she can only love boys, but she also resents that her friends assume she is gay simply because she’s a tomboy and that they try to helpfully nudge her out of the closet, when she just wants to figure out her sexual orientation for herself.

This book could have gone very wrong, but it doesn’t, as it is handled with the perfect sensitivity. Given the subject matter, it could have easily been bitter in tone with the church and community members portrayed as closed-minded bigots. Stevens’ world is bigger than that, with saints and sinners who have many layers. Also, given Billie and her friends’ quest to save the Harvest Festival and the corn dolly ceremony, this book could have been saccharine, but it doesn’t do that either. It’s a feel good book for people who don’t typically like feel good books.

I would recommend Dress Codes for Small Towns for fans of realistic YA and also for anyone who grew up in an evangelical church.